Work comes to the rescue once again. Just when i had started to settle down, began spending more and more time under the comfort of the razai, comes the trip to Burhanpur. I am sure, most of you, just like me,  have not heard about the existence of such a town. Its only claim to fame, Parvati, my colleague tells me is that  Isabgul is made here. 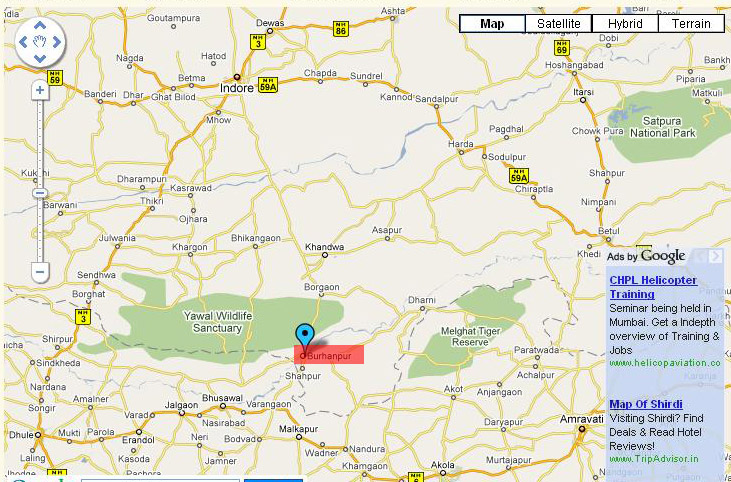 Geographically, Burhanpur is located on the banks of the Tapti, 180 kms south of Indore in Madhya Pradesh. Its location is such that it is surrounded by Maharashtra on three sides. Its a very sparsely populated part of the country. The landscape is arid with either sal forests of low shrubs. Every now and then there are chains of low hills which at some points create quite a few breathtaking montages.

22 kms northeast of Burhanpur, in the middle of dense forests, one particular hill rises more than 2,300 feet from bare ground. This hill protects within itself  a number of perennial pools and the summit commands, on a clear day, a stunning horizon looking over hundreds of kilometers of the Nimar plains. The Farooqui rulers who reigned over the region before the Mughals, fortified the hill at three levels. The lowest level of fortifications was called the Malaigarh. Further up was Kamargarh, the second level of fortifications. Crowning it all was the unassailable Asirgarh.

Legend has it that this fort can never be conquered by force. When we went to the fort, we witnessed for ourselves the meaning of the word “impregnable”. Each level of fortification was a fort in itself. The walls run all around the hill and are riddled with sentry points at every nook and cranny. Not even a fly could have passed unnoticed. Then on top of it, to get to the king who would have been stationed at Asirgarh, you had to conquer not one but three forts.

Even the greatest of the Mughals – Akbar, had to face his match here. After six months of incessant warfare, he realised that he could not win the fort by direct millitary attack. The fort’s canons, stationed high on the hill were out of range for the Mughal guns but rained fire and brimstone  on Akbar’s army. So he tried a different tactic. He retreated with his army just out of range of the Farooqui canons, surrounded the hill with his 5,00,000 men and laid a siege. within a year supplies of the garrisoned troops in the fort ran out and a mass surrender followed. As it transpired, the royal family along with a handful loyal and brave warriors had managed to escape through an unknown route and were never seen or heard from again.

Today, the fort can be accessed by a variety of routes. For those climbing with vehicles, it is advisable to use the old British road (yes, the British occupied it too).  We had decided to take the car up as far as possible and then climb down later using the original paved pathway hacked on the surface of the hill by the Farooquis. You can gauge the height of the fort by the fact that the road from the base of the hill to the makeshift parking at the neck of the hill measures a full 7 kms.

The car stops at Kamargarh from where you proceed on foot to Asirgarh, which housed the citadel, the best of the soldiers, stables, a jami masjid and a temple.

One of the main attractions in the fort is the Jami Masjid. Perched on one edge of the cliff, the twin lofty minars can be spotted for miles around. While we were approaching Burhanpur in the train the minars could be seen from the window of the train. It is a mammoth structure built with black granite – a mark of Farooqui architecture. It looms large over you as you approach it. Of all the buildings in the fort, only the masjid and the temple have survived almost intact. Providential? 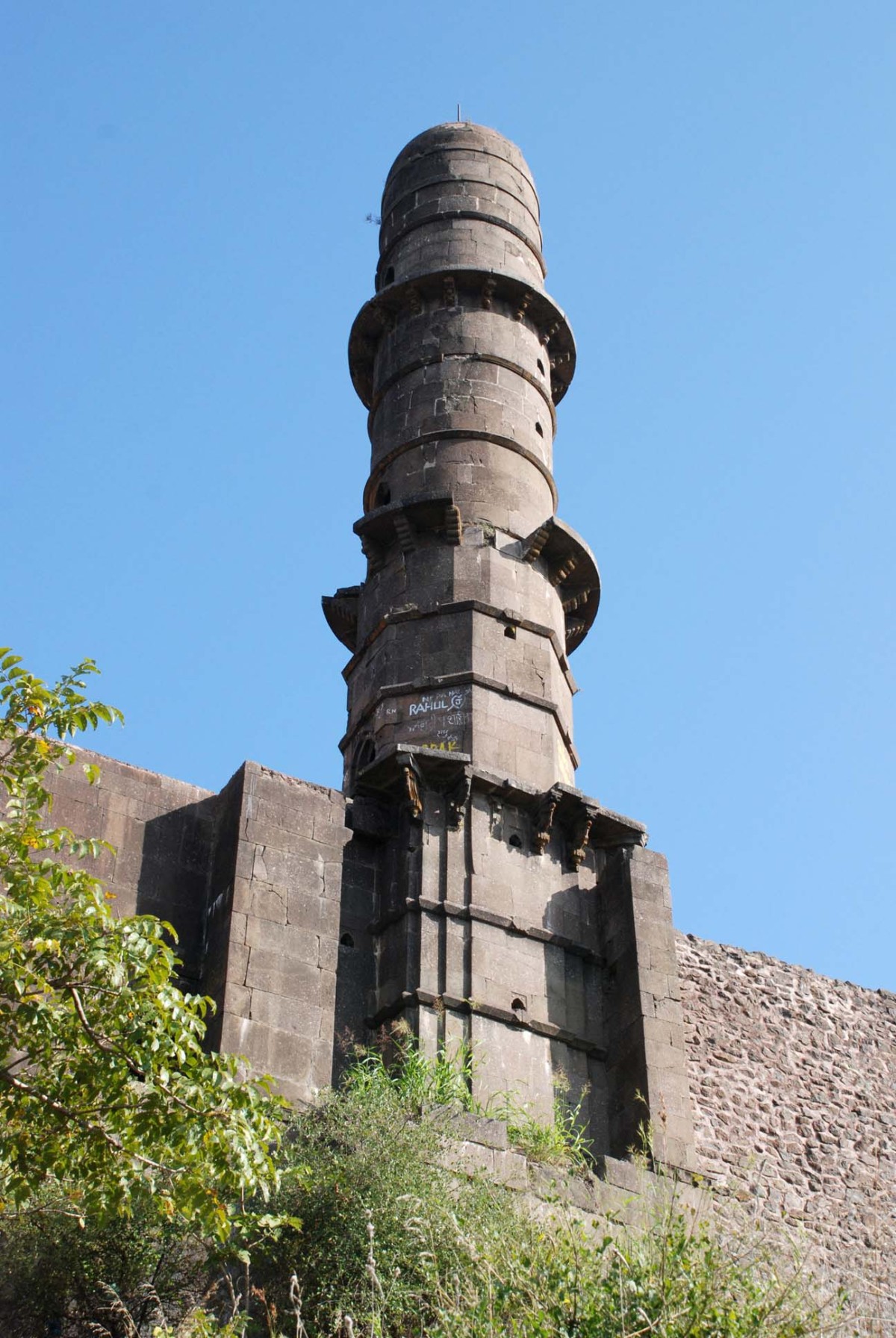 Built on a platform that is almost 8-10 m tall, the mosque built of huge blocks of granite gives off an air of solidness. So hard are its rocks that even time seems to have collided against it and stopped. Most of the mihrabs, both on the qibla as well as the north and south walls were once faced with intricate jaalis. Very few have survived.

You follow the road adjacent to the southern side of the structure and it winds left to lead you to the east-facing gateway to the mosque. You enter through three tall arches. You cannot help but feel dwarfed by the scale of the structure around you. The grand, lofty arches, the soaring pillars and the eerie silence – all add to the intrigue that is Asirgarh.

The minars rose against the backdrop of clear blue sky, dramatised even further by thin, wispy clouds. It could not have been any better!

The sanctuary of the mosque is composed of four isles of pillars topped by arched capitals – a hallmark of Farooiqui architecture.

If you ever go there, please remember that you can climb up the minars through the spiralling staircase in them. Avoid using the left minar as it is structurally weak. As we climbed up the right minar, we first stopped on the roof of the masjid. From the edge of the roof, it was a clear drop of 2,300+ feet. From a distance, as you can see in the following pics, it looks as if it were a platform suspended in mid-air.

The view from the top of the minar..well.. takes your breath away. You are so high up that your stomach begins to churn. You can see the fort down below and notice how it is a vantage point to keep an eye on the vast rolling plains all around you.

Also in the fort is a temple, built beside a baoli. By the looks of it, it seems that the temple was buile in the later half of the sixteenth century, roughly corresponding to the years of Akbar’s occupation. Local guides, however, will insist that the temple is over 5000 years old and was built by Ahwatthama of the Mahabharata. They will further claim that on many a moonless night the spectre of Ashwatthama can be seen walking odown the steps of the baoli to the temple. However incredulous it might sound, one must not take the words of the guides lightly, because had it not been for these fantastic stories they weave, my job..nay, history itself would have been rather drab.

The inside of the temple was dark, except for a thin light like sensation that helped us to make out the mouldings and the corners inside the shrine. A couple of long exposures revealed that the interiors of the temple were once painted.

From the temple we carried on with the walk along the ramparts. We were following the high outer walls of the fort and that ensured that we covered the entire complex in one huge circuitous route.

The primary reason why the fort came up on this hill was the presence of a number of natural and perennial sources of water – a key requirement in maintaining a garrison. The two talaos directly in front of the British barracks are known as Mama-Bhanja. Again, our guide, Sat Narayan ji came to the rescue and added an anecdote to these otherwise green water bodies. According to him, if any real life mama and bhanja go in for a dip in the waters of either of these talaos, they will never emerge alive. Sinister, very sinister!

Half a kilometre further from the twin talaos is a little cemetery for the British officers and their family members who died in the fort. We were surprised to find the earliest grave dating back to 1810.

From the cemetery, we went back to the gate which let us into the fort. As decided earlier, the car had gone down and would be waiting for us at the tea stall in the3 village down below. We would be walking down using the path that the Farooquis had built more than half a millennium earlier.

As we climbed down the pathway, which was largely a long staircase, we were thankful that we had taken the car on our way up. The steps were huge and even while descending, we were frequently feeling breathless (doesn’t say a lot about our fitness levels, either). With every turn in the road, the fort above our heads kept receding to the skies. The real sense of enormity and vertical distance was becoming more and more apparent.

Asirgarh was definitely the high-point of our Burhanpur trip. But my dear travellers, it is definitely not all that you see in Burhanpur. The city and its immediate environs are literally dotted with historical monuments small and big, taken care of and neglected. Watch out for a sample of the Burhani flavour in this space. Till then…