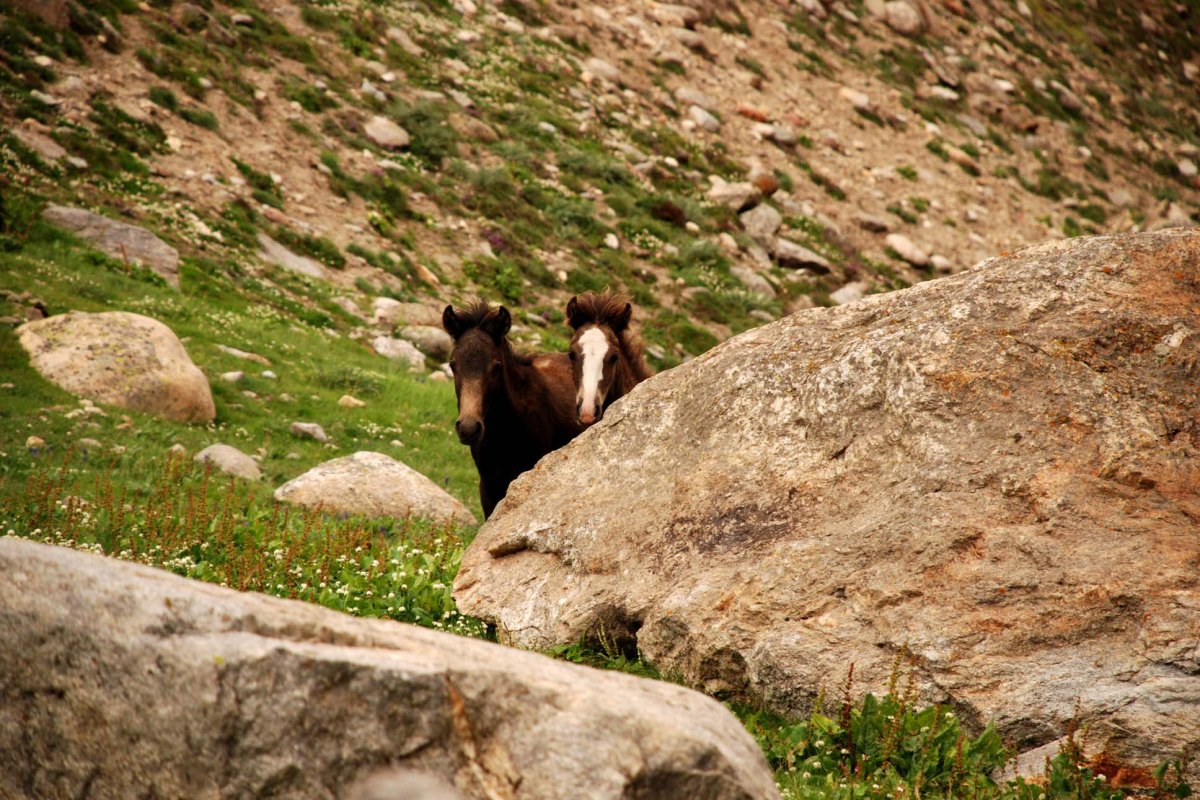 There was a time when Ladakh was an adventure. To many, it still is. I am sure the day i start my ride to Ladakh, it will still feel like the biggest thing. But in my heart i knew that the Lahaul and Spiti valleys of Himachal Pradesh is more adventurous and far more desolate than the fanfare that is the Manali-Leh Highway.

Present circumstances would not have allowed me to explore the valleys like i would – taking my time over each place, pouring through the thankas at Tabo or resting for a day or two at Dhankar. So it was decided to catch a glimpse of it first time around. After a lot of reading and consultation with seasoned travellers, a name emerged – Chandrataal. Located at an altitude of 4,300 m at the entrance of the Spiti Valley, near the Kunzum La Pass, it would both give me my first glimpse into the region and also ensure a week-long ride from Delhi.

This post is the first in a two-part series through which i intend to detail the entire adventure.

The idea was first to ride solo, but sense prevailed and in time i was joined by my friend Saumya Tyagi, who was between jobs and needed time for his thoughts before plunging back headlong into the rat race. We gathered at my place on the night of 6 August so that we could ride out by 4 and cross the city limits before the first light. I had thought that we would be able to catch a few hours of shut eye before starting off, but anticipation ensured otherwise.

Sleepless, we trudged through the diversion filled National Highway 1 to Ambala. Except for a small malfunction on Tyagi’s bike which was fixed at Kurukshetra, we were making quick progress. From Ambala, we changed over to National Highway 22 and continued via Chandigarh, Ropar and Kiratpur Sahib. A little after we took the right turn from Kiratpur Sahib, and were about to hit the hills, we were stopped on our tracks by a heavy downpour. We took shelter in a cow shed and had a fidgety buffalo and its calf for company. The rains lashed on for almost and hour and by the time we resumed the ride, we were way behind schedule.

The 41 km stretch from Swarghat to Bilaspur was marred by bad roads and heavy and slow moving truck traffic. This along with regular stops for rains meant that our dreams of reaching Manali by nightfall was steadily receding to the distance. Both of us were not keen on driving on hill roads at night as apart from the obvious hazards, we did not want to miss out on the beauty of the ride. The rains held after Bilaspur and we were able to drive to Mandi (110 kms from Manali), with a short stop at Sundernagar before sun-down.

Next day, the ride resumed in a relaxed fashion as we had a little more than a 100 kms to cover. The road from Mandi to Manali follows the Beas, which was tumbling down in resounding fury, fed by the plenitude of the monsoons. Road conditions, barring a few stretches which were affected by recent landslides, were excellent and soon we were leaning on the turns and breaking into  careful bursts of speed in the empty, straighter stretches.

Before long, we crossed Bhuntar and two hours into the ride, we entered Kullu. We had forgotten about the Kullu by-pass road on the other bank of the Beas and headed straight into the city. At the chowk in the middle of the city, i spotted  a small and colourful procession and stopped to investigate. A group of priests from a neighbouring village were carrying on their shoulders images of their village deity. The deity was being taken to visit the god of Kullu who is said to be the most powerful of them all.

Immediately after Kullu, we entered the apply country. On both sides of the road were apple trees full of fruit.

We reached Manali by 4 in the afternoon. The drive from Mandi to Manali was extremely relaxed and we stopped at every place we wanted to. It was important to take it easy as the next day we had to drive to Batal, from where we would commence on the trek to Chandrataal. We went straight into Dragon Guest House in Old Manali and got a double room there for 700 bucks. A quick hot shower later, we were ready for lunch.

At first there were lots of varied opinions on whether the road to Chandrataal was open or not, but then it finally appeared that it was, although we were warned that the state of roads in Rohtang were deplorable. We did not realise the full gravity of the situation until we reached Marhi, from where the climb to the pass begins. It was extremely cloudy at the road level and it reduced the visibility to around 30 feet. Added to this was incessant rains, landslides at regular intervals and the resultant knee deep muck and of course the famous traffic jams.  The  state of this stretch can be surmised by the fact that it  took us over 6 hours to reach Rohtang Top, which is 51 kms from Manali.

We had to make a pit stop at Marhi from where Tyagi picked up a funny overall which, coupled with the heavy helmet made him look like an astronaut. It was not strange when he started referring to himself as a ‘space monkey’. Also at this dhaba, we met Wolfgang Maehr. He is an IT professional working for the last two years in Chandigarh. Wolf was also headed to Chandrataal and we decided to stick together. It was a wise decision on our part as from here on, he was responsible for taking turns in saving our asses at regular intervals – fixing Tyagi’s bike, pulling me and my bike out of  a stream, lending woolens to Tyagi, and supplying me with a canister of oxygen when i was literally gasping for breath.

One of the brightest points en route to Rohtang was sighting what seemed like a Himalayan Griffon Vulture (Gyps fulvus). Due to loss of habitat in the plains, they are becoming a rare sight these days. In the Himalayas, however, they thrive, riding on the thermals and ridding the mountainside of rotting carrion. I tried to get as close to the massive bird as possible but eventually it flew away into the mist. 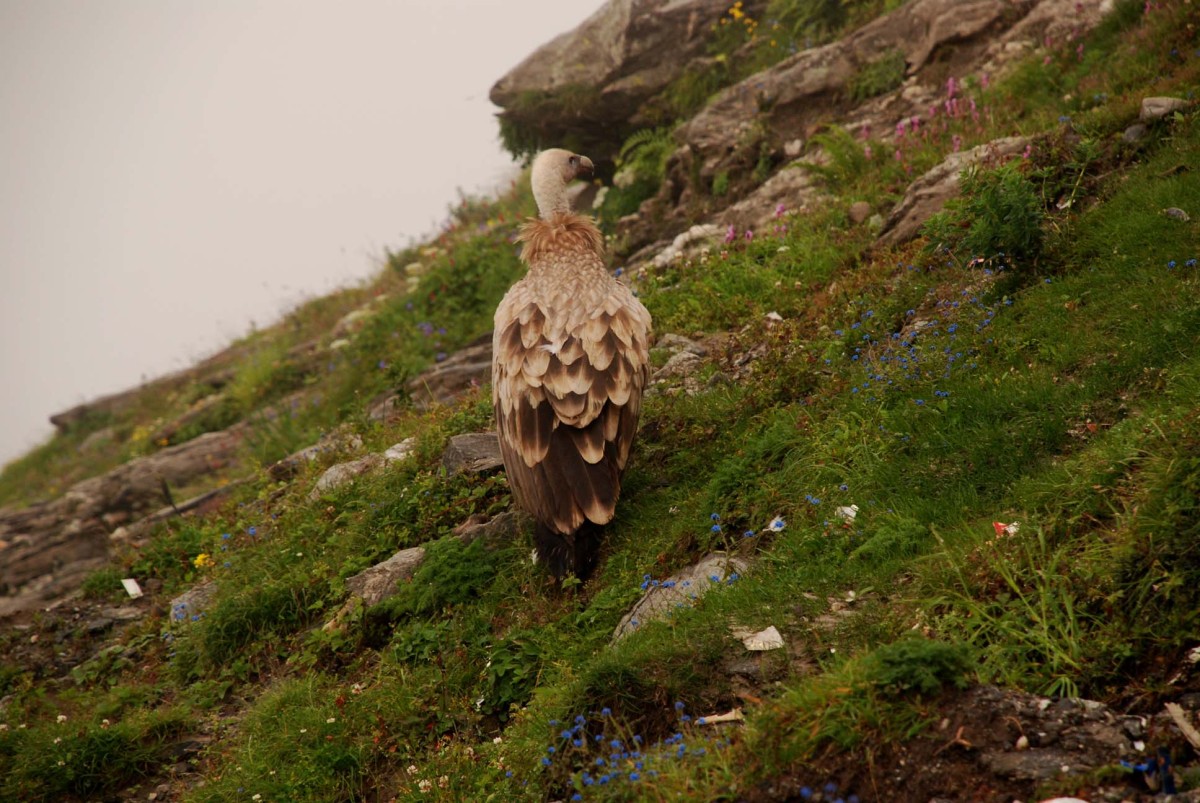 After Rohtang, we had to take the Leh highway till Gramphoo from where we turned right on the road leading to Kaza. The destination for the day was a small camp at Batal which is the base for the Chandrataal trek. As soon as we were over Rohtang, the sky cleared and for the first time we got a glimpse of the Lahaul Valley. Snow covered peaks dominated the upper horizon while closer to us were the steep and precipitous mountainside carpeted with patches of grass, broken by the occasional tumbling stream fed by the melting glaciers on the higher reaches.

We drove down the winding switchbacks on the other side of the mountain from Rohtang and reached the valley of the Chandra River. We were to follow the Chandra or the Chandrabhaga all the way to Batal. It originates from Chandrataal and swells in volume fed by the streams of melting ice. In Kashmir it is known as the Chenab and ultimately drains a wide basin in Punjab (both in India and Pakistan, before merging with the Indus.

The roads here defied all explaination. There was tarmac, but only in patches. For most part it was either gravel or  dirt track – the kind of roads where motorcycling is real real fun. There were stretches where streams crossed the road. You have to drive through  these streams of ice cold water without any idea about the size of rocks under the water.  On one occassion, Wolf’s engine died, then both Tyagi and I got  stuck in the rocks. No matter how good or tall your shoes are, the water will find a way in and once it does, will chill you to the very bone.

During the whole stretch, i was lagging behind as i kept stopping for pictures. The landscape kept changing dramatically. the more we went, it kept getting more and more barren. For miles we could not see any signs of habitation. Occassionally you pass a jeep full of tourists and the rare Himachal Tourism buss ferrying people from Kaza to Kulu. The landscape keeps stealing your breath away. Mountains you had seen in photographs suddenly spring forth in front of you and the scale of things hits you like a punch on the face. All you can do is stop the bike for a while, turn off the engine and revel in the stillness of nature. In due time, it knocks back on your mind that you have a destination to reach and it is then you push on ahead, anticipating with eagerness what sight the next turn in the road brings.

17 kms from Gramphoo and half a dozen small and big water crossings later we arrive at Chhatru. A small village with a population of 120, it has a couple of dhabas where wary travellers like us stretch their legs and sip on some much needed chai. Batal, our destination was 32 kms away. Given the nature of the ‘roads’, it would take us another 2 hours. so reenergizing is a must.

When we started towards Batal from Chhatru, the sun had already begun its descent behind the mountains. The magic evening light cast a marvellous hue on the already breathtaking surroundings. Added to these were the numerous herds of wild horses along the way. They scatter at the sound of the oncoming vehicle but some of them actually gallop alongside you. Trust me, there is no prettier sight. I would gladly exchange my Bullet for one of these beauties.

Finally, at the end of a whole day of riding, we reached the camp at Batal. Unlike Chhatru, Batal is not a village but a collection of two dhabas. Here, apart from dal-chawal, eggs and maggi, you can rent a bed for Rs 50 a night. We would spend the night here and in the morning embark upon the trek to Chandrataal.

The next part of the blog, which will be published shortly would describe the sights and sounds of the actual trek to Chandratal, and a personal tragedy encountered on the way. Till then, happy reading!

25 thoughts on “Chandrataal: Adventures on the way”