For years now I have been delaying my plans to embark upon a road trip to the Mecca of Indian bikers – Ladakh. But then the most unexpected of things happened. Royal Enfield offered to take me on a ride from Delhi to Ladakh to test ride the Himalayan. I would be a fool to turn down the offer of a lifetime.

This would be my first road trip in three years. There were doubts. many, many doubts. Do I still have it in me to travel these long distances? What if I get mountain sickness? What if the bad roads and the strain of the saddle trigger my dormant sciatica? Strangely enough, all these doubts dissipated the moment I swung my legs over the rugged Himalayan on a sweltering July morning at India Gate.

What followed was a week of riding, riding, and then riding some more. Fine, I did fall off a couple of times, but in my defence, it was only while I was trying to show off. So anyway, while I battle my laziness and contemplate how to document the journey in this blog, here’s a teaser of the journey; Through some photographs from the phone. Hopefully someday soon I will manage to get off my ass and write a travelogue and post photos from the ‘proper’ camera.

CHAPTER I: THE HIMALAYAN

I worship my Royal Enfield, a 2008 Machismo 5oo. But the Himalayan was a different beast altogether. For starters, it is purpose-built to take on the rough roads and then carry on when even these ‘roads’ ended. This is not a review of the motorcycle, but let me tell you this, the chassis and suspension are on point. What I loved most was the positioning of the foot pegs; it allows you to stand up and ride. Specially designed indentations along the fuel tanks help you lock in your knees and just glide over the rough patches.

I have always admired motorcycles for their simplicity and ruggedness. After 6 days and close to 2,000 kms on this motorcycle, I can report that not one panel on the bike exists for aesthetic purposes. Everything is rugged and everything is functional. This is what, in my mind, makes the Himalayan beautiful. There is a lot of bite in the brakes, at times, a bit too much, but this is something you will get used to.

All these improvements on the Himalayan meant that it was really hard for me to get off the saddle. As a result, the 320-odd kilometres between Chandigarh and Manali was covered with just one butt break (not counting the photo stops). The previous day we rode into Chandigarh from Delhi, a distance of some 260 kms. This was good because it gave me time to get used to the bike before hitting the hills.

Following the Beas: Snapshots from the road to Manali

Following the Beas: Snapshots from the road to Manali

When you are used to riding the older generation Royal Enfields (and in this, I am including the models with the ‘new’ UC engines), you become so accustomed to vibrations at high revs that when you come across a motorcycle with no vibes whatsoever, it seems rather unreal. This is exactly what happened to me between Delhi and Chandigarh; on top gear at 110-120 kmph, I felt no vibrations whatsoever, at neither the handlebars nor the footpegs.

This also brings us very neatly to what is the biggest downside of the Himalayan – the rather unimpressive power delivery on the higher rev ranges. This is felt the most on long stretches of empty roads where you might want to give it some beans. Irrespective of how well you shift or how wide the throttle, the higher reaches remain annoyingly flat. This motorcycle needs and deserves 10 more horses. The day Royal Enfield makes this happen is the day I put down my deposit on one. 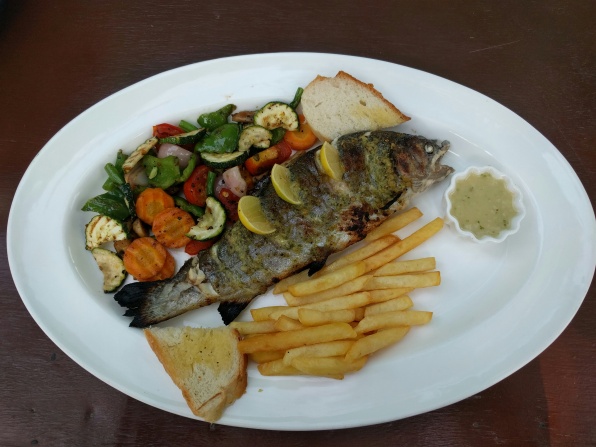 It can die for me and i can travel great distances for it.

The flat Delhi-Chandigarh and the twisty Chandigarh-Manali stretches ensured that by the time we left Manali towards Rohtang and beyond, I had gotten the hang of the Himalayan. The Himalayan Odyssey is a group ride and this year there were close to 80 riders. In addition to this, there were us, a handful of riders from the media. I am not that much of a group rider; in fact, i ride alone and ride to get away from people. So, the mornings were usually slightly stressful for me. 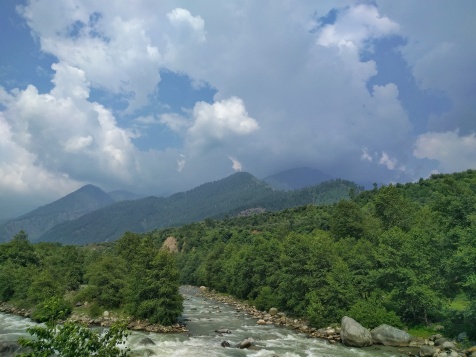 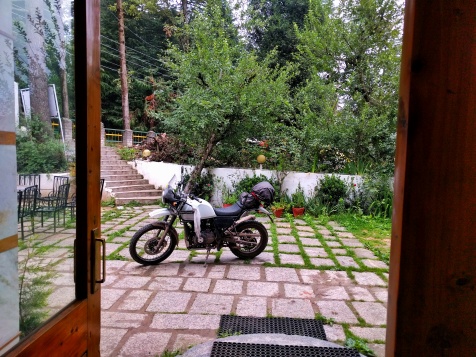 Early morning in Manali/ All set for the road ahead 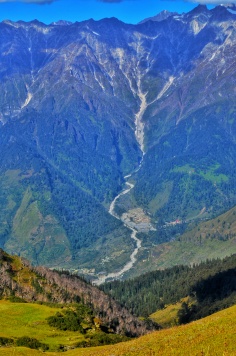 Of soaring mountains and plunging valleys 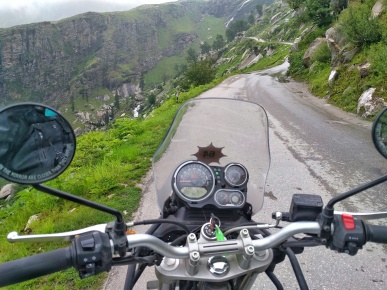 View of the road to Rohtang

Road we left behind

A photo stop at the beauty spot at Marhi 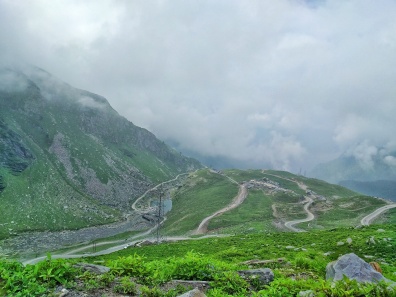 At the top of Rohtang, looking down

Going as close to the edge as I dare

Going as close to the edge as I dare

But where there is anxiety, there is also a solution. I planned ahead and parked the bike closest to the exit spot so that in the mornings I am one of the first riders to leave. Upon leaving, I picked up some speed (it was relatively easy as I am a paced rider by nature) which allowed me and a couple of experienced riders get a considerable headstart over the rest of the group.  Once you cross Rohtang and descend into the otherworldly Lahaul-Spiti valley, you need to be in your own skin to enjoy the ride and this strategy allowed me to do so.

CHAPTER III: ON THE BANKS OF THE BHAGA

Our destination on the third day of the ride was the tiny mountain village of Jispa. At barely 110 kms, this was the shortest riding day of the trip. Coupled with my riding strategy, this meant that I was able to reach Jispa well before the rest of the gang arrived. Jispa is but a small hamlet located at the widest part of the Bhaga valley. The river here is wide, shallow and full of pebbled banks and a much-needed refuge to worshippers of solitude. Spend some time here, amid the relative greenery before you venture into the land of the high passes, the sparse, stark cold desert.

The word ‘Ladakh’ translates to ‘the land of high passes’. The first of these, Baralacha La, lay but a few kms from Jispa. The previous night was spent in the throes of a myriad of impossible dreams – an obvious effect of the high altitude. So as I swung my legs over the Himalayan’s saddle, I was acutely aware of the fact that on this particular day, we would end up camping at Sarchu, about a kilometre higher than Jispa. I had been previously under the impression that altitude-sickness would not affect me – what with all the trips across Spiti and a couple of high-altitude treks under my belt – but boy, was I about to be proven wrong.

Altitude is a great leveller and pride comes before Acute Mountain Sickness (AMS). Avoiding the precautionary dosage of Diamox was a bad idea. Baralacha La came and went, but what remained was a constant throbbing in the head and a strange tingling on the lips. Every breath was laboured and progress was hard. There was barely any strength left to stand on the footpegs and let the lovely Himalayan (which, at this point was faring better than the rider) loose over the gravel and the occasional water crossing. Your appetite goes for a toss, but you need to keep a full stomach to fuel the body and keep the situation from getting worse. Luckily, the lovely tented restaurants along the way dish out many a delicacy from their makeshift kitchens. 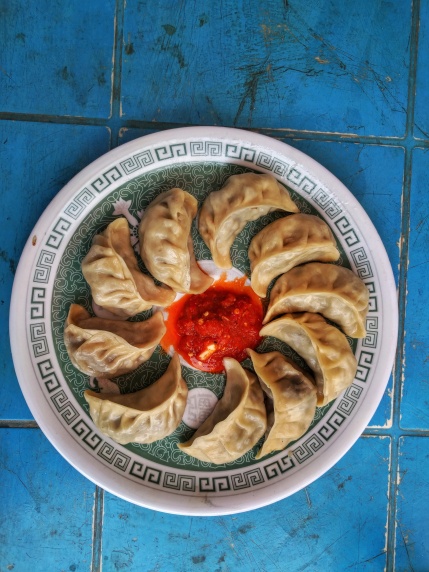 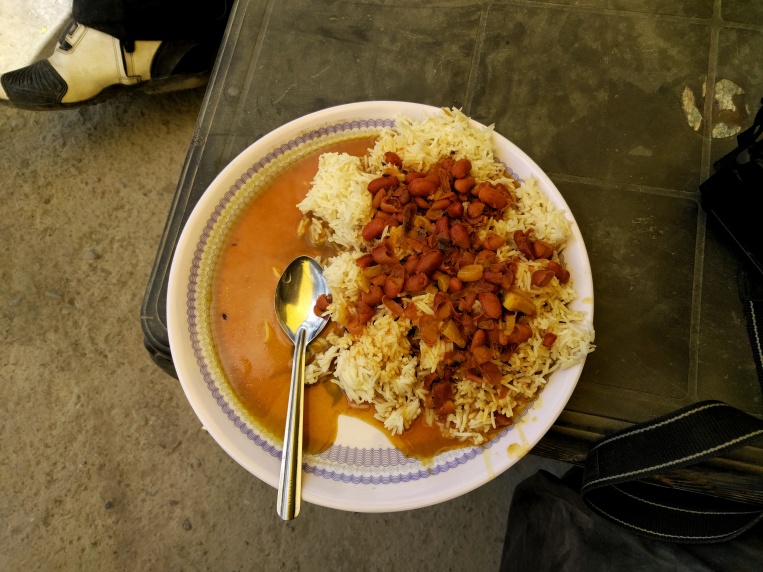 Sarchu is cold, windy but impossibly picturesque. It is also a nightmare for those staying overnight. There are no permanent structures, only tents offering varying degrees of ‘luxury’. Gasping for breath, we reached our encampment, neatly lined up in the middle of the windswept plains against the background of the stark, craggy hills.